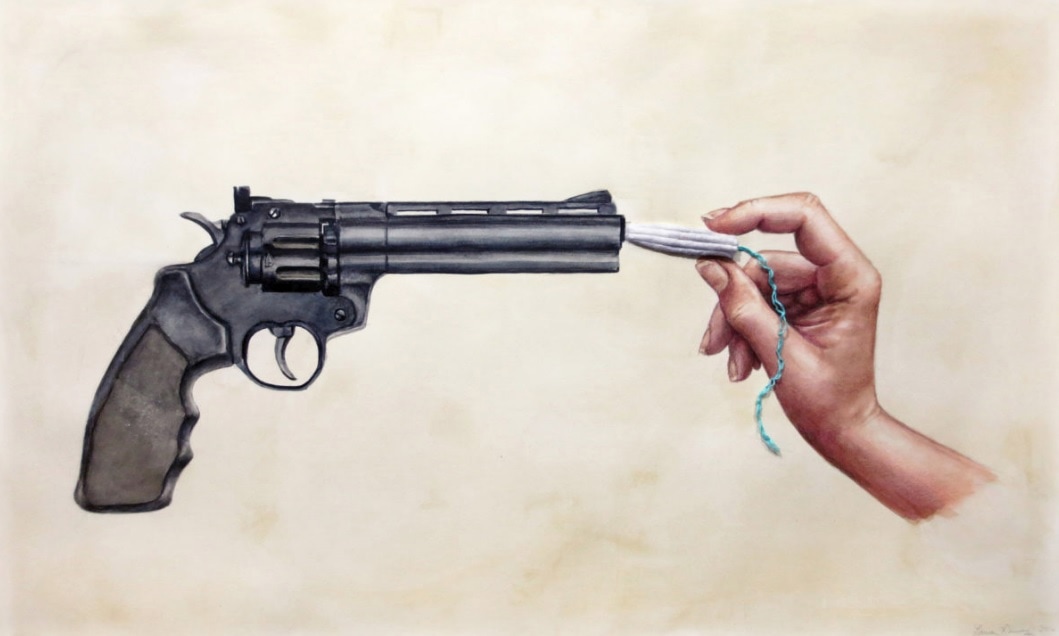 Plug It Up’ by Laura Murray is featured in UPRISE / ANGRY WOMEN Exhibit artwork at The Untitled Space Gallery, New York.
UPRISE / ANGRY WOMEN
A Group Exhibition of 80 Female Artists Curated by Indira Cesarine
A Portion of Proceeds to benefit the ERA Coalition’s Fund for Women’s Equality

The Untitled Space gallery is pleased to present exhibition, UPRISE / ANGRY WOMEN, curated by gallery director and artist Indira Cesarine, featuring the work of 80 female contemporary artists responding to the current social and political climate in America in light of the recent presidential election. The exhibit will take place from January 17- 28, 2017, opening the week of the presidential inauguration, with several events to take place including an opening reception on January 17 and event on January 22 – which marks the 44th anniversary of landmark case Roe vs Wade.

The UPRISE / ANGRY WOMEN exhibit is presented in partnership with the ERA COALITION, a political organization that is working to support passage and ratification of the Equal Rights Amendment, and a portion of proceeds will benefit their Fund for Women’s Equality. The Fund for Women's Equality is a charitable organization, working to raise awareness on gaps in the law that leave women without legal recourse from sex discrimination, and developing educational resources on the need for a constitutional provision to protect and promote equal rights for women. Founded by Jessica Neuwirth, author of "Equal Means Equal", the ERA Coalition board also includes Gloria Steinem, Teresa Younger and many other prominent women's rights activists.

"The 2016 presidential election has brought to the surface extremes of sexism, racism and discrimination. Many women are deeply disturbed not only by the negative stereotyping and sexist attitudes towards women that have surfaced but also the threats to roll back women's rights. The “UPRISE / ANGRY WOMEN” exhibit gives female artists a means to express themselves in regards to the social and political climate in America, and empower others with their visual imagery. We are proud to partner with the ERA Coalition and help raise money for their Fund for Women’s Equality. Right now more than ever women need to unify and work together to ensure that our rights, which were fought for with blood and tears for many decades, are not only assured, but continue to progress.
We received an incredible response from female artists all over the country regarding the exhibit, with over 1800 submissions of artwork by over 400 artists. It was by far one of the most challenging exhibits I have curated to date, as so many talented artists submitted such a wide array of powerful works.”  - Curator Indira Cesarine

ABOUT THE UNTITLED SPACE:
The Untitled Space is an art gallery located in Tribeca, New York in a landmark building on Lispenard Street. Founded in 2014 by Indira Cesarine, the gallery features an ongoing curation of exhibits of emerging and established contemporary artists exploring conceptual framework and boundary pushing ideology through mediums of painting, sculpture, printmaking, photography, video and performance art. The gallery is committing to exploring new ideas vis-à-vis traditional and new mediums and highlights a program of "Women in Art" as well as special events aligned with our creative vision.

ABOUT THE ERA COALITION AND FUND FOR WOMEN’S EQUALITY:The Fund for Women’s Equality, a 501 (c)(3) charitable organization, promotes legal and lived equality in the United States by increasing public understanding of the need for comprehensive, fair and equal treatment of women and girls under the law and the need to end sex inequality in all its forms. The ERA Coalition, a 501 (c)(4) political organization, works with Congress and grassroots activists for the passage and ratification of an Equal Rights Amendment. All men and women are created equal and that must be reflected in the Constitution. For more information visit online www.eracoalition.org.
SELECT ARTIST STATEMENTS
“Our current political and social climate is arguably the most divisive, chaotic, and turbulent period that anyone of my generation or younger has ever experienced in this country. With the recent election, it's impossible to turn on the news, open a social media app or even listen to podcast without hearing strong discourse. Having always been interested in women’s bodies- this election, once again, made it apparent how women’s stories of sexual subjugation and violence are socially minimized and repressed as taboo. “Current Mood” was created in response to our President Elect bragging about his ability to grab women’s genitalia in an Access Hollywood tape recorded in 2005. He responded to this video by calling it “locker room banter”. It's important not to let our president elect’s hate speech become normalized.” - Artist Jennifer Dwyer

“Painting allows me to say those things and convey ideas and concepts that I would not normally speak out loud. I can be bold and unapologetic in my paintings... I’m angry at America for electing a reality TV star, racist, misongynist, to be our new commander in chief, I’m angry at the government for running pipelines through sacred land and contaminating water all for the sake of a dollar or oil or whatever. I’m angry that women in this country still make less money than men, not to mention women of color, make even less. I am angry for so many reasons and the list could go on and on. My way of dealing with this anger is not to pick up a gun, not to fight physically, but to pick up my paintbrush and to put my feelings on canvas.” - Artist Kristen Williams

“There is a need to reweave our nation’s social fabric as it is being torn. My artwork introduces the possibility for this transformation and repair. Discarded clothing is my paint, a metaphor for worn, tired, used, and abused humanity I rescue and transform in my process. I dismantle the fabric of the world and piece it together differently. I assemble, bring together, and combine disparate pieces of people to create an integrated, unified, harmonious new whole. I combine the energy of many into something of beauty, vitality, and hope.” My commentary on racism, “Weeding”, uses the garden as metaphor for the world... Pointing the finger at people who do not fit familiar patterns of one’s own race, religion, gender, culture, morality, or politics and labeling them weeds hides their humanity and justifies their uprooting and destruction. We must cultivate empathy for one another or “united we stand, divided we fall.”” - Artist Linda Friedman Schmidt 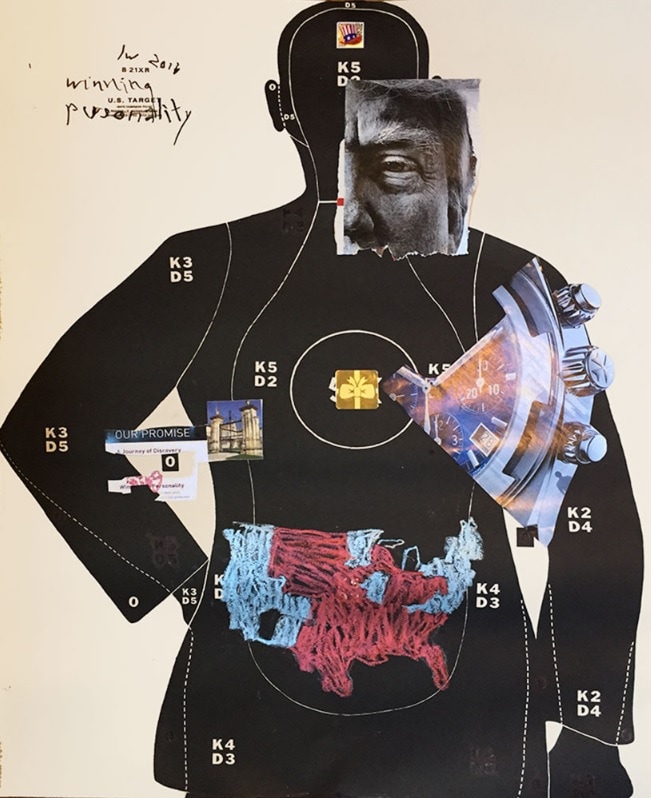 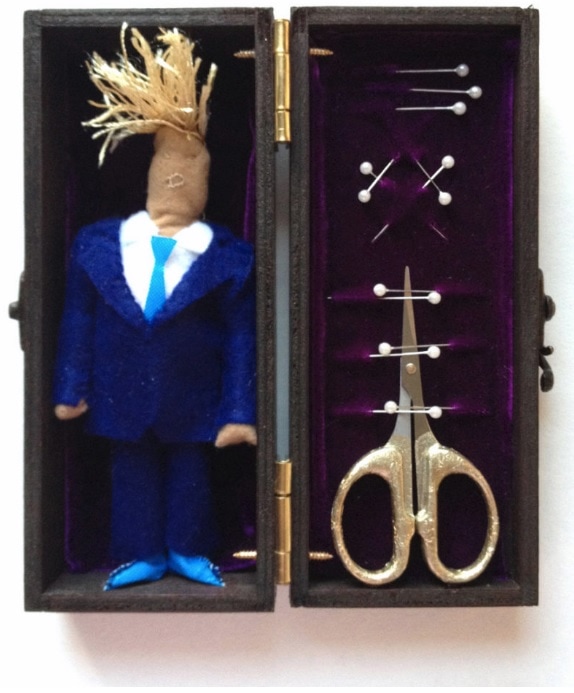 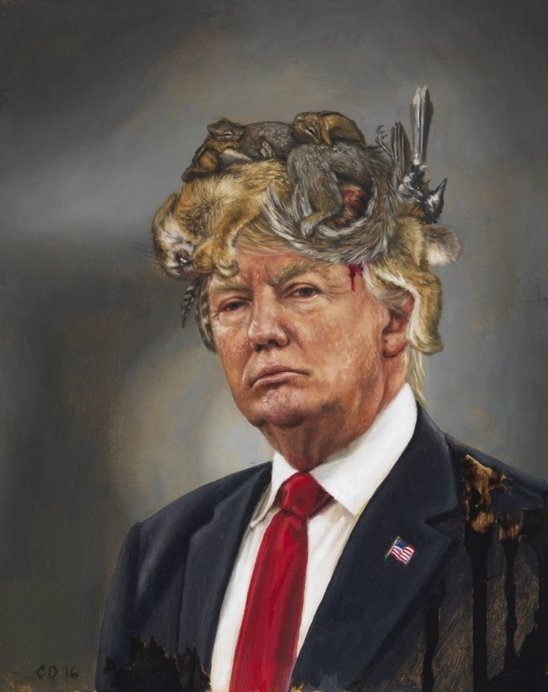 ‘Donald Trump with a Crown of Roadkill’ by Cara DeAngelis is featured in UPRISE / ANGRY WOMEN Exhibit artwork at
​The Untitled Space Gallery, New York. 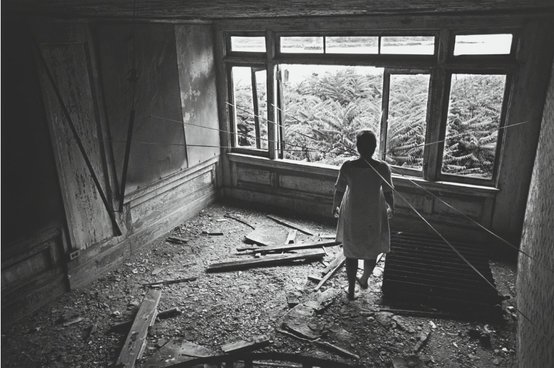