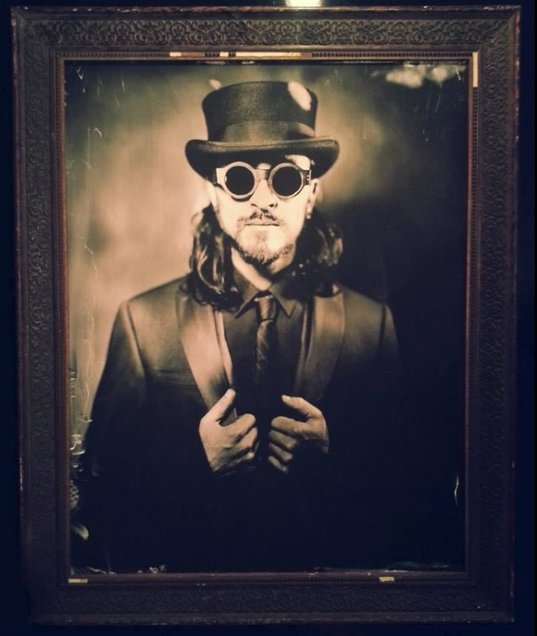 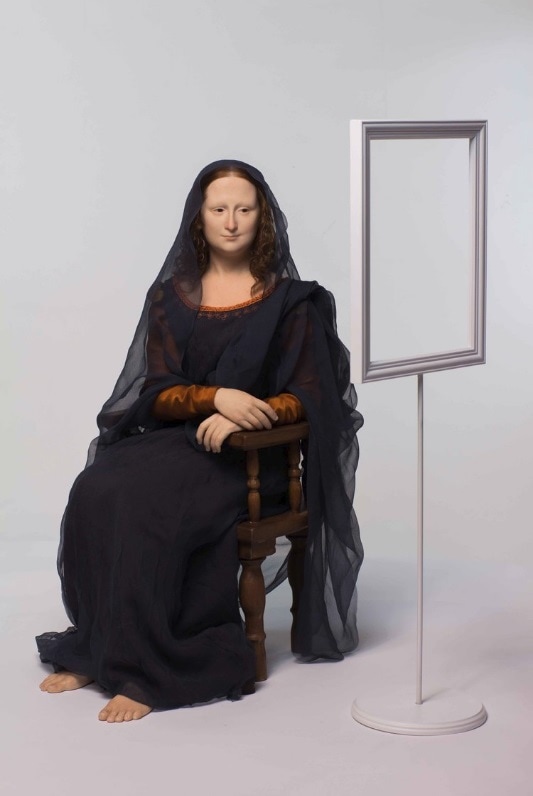 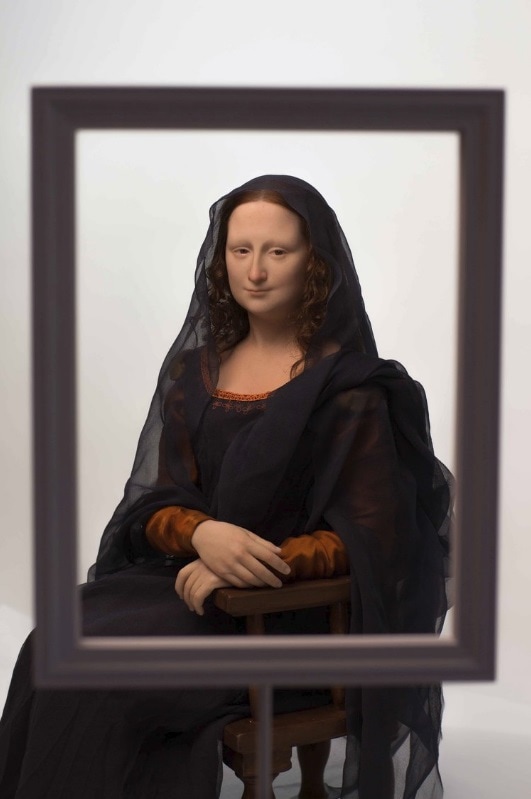 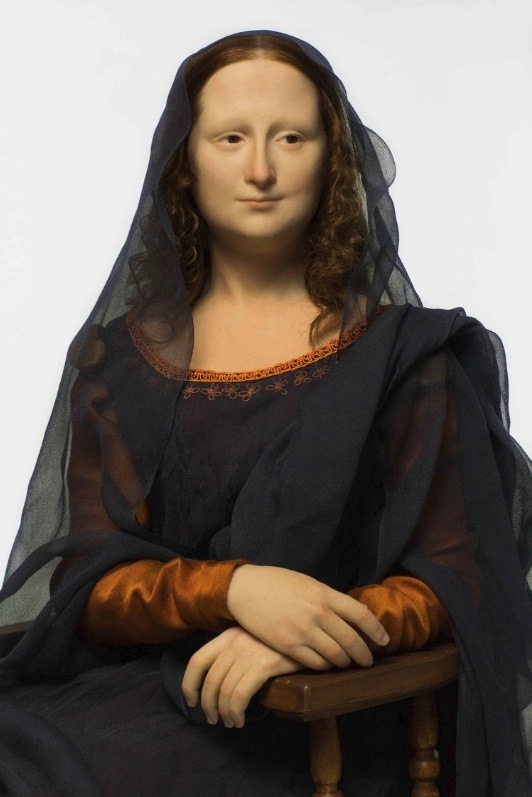 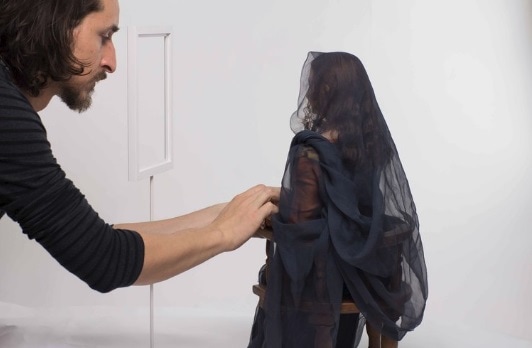 ​Valter Casotto,
born in Padua Italy (1980), Italy.
Valter currently lives and works in London. He has worked on numerous TV productions as a camera operator and TV format creator. He has worked as the senior prosthetic makeup artist in the film industry, on films such as Harry Potter (D. Yates), X-Men: First Class (M. Vaughn), Prometheus (R. Scott) and The Hobbit (P. Jackson),. Running parallel to his work in the film industry, he has contined to work on his own personal projects, including design work, painting, video projects and sculptures. Visually inspired and influenced by a combination of William Turner's pictorial art, H.R Giger's visionary surrealist work and Bernini's Baroque sculptural art, his preferred techniques are those of video and sculpture which he recently brought together in his project ‘We Will Never Meet at that Age’. He created a self-portrait of his own ageing physiognomy and had it applied to himself, documenting his parents’ reaction to seeing their son at an age they will never meet in real life with a moving image piece, thus creating an impossible time breach in the fabric of his parents’ existence.

Artist Statement
Valter work mostly deals with the conceptual exploration of the facets and transformations of both human and individual identity in time. This has become a recurring theme in his work. By means of hyper-realistic and abstract work. He openly invites viewers to consider and reflect upon the importance of their own identity in time, also in regards to memory and the possibility of surpassing the boundaries conventionally bestowed on it. 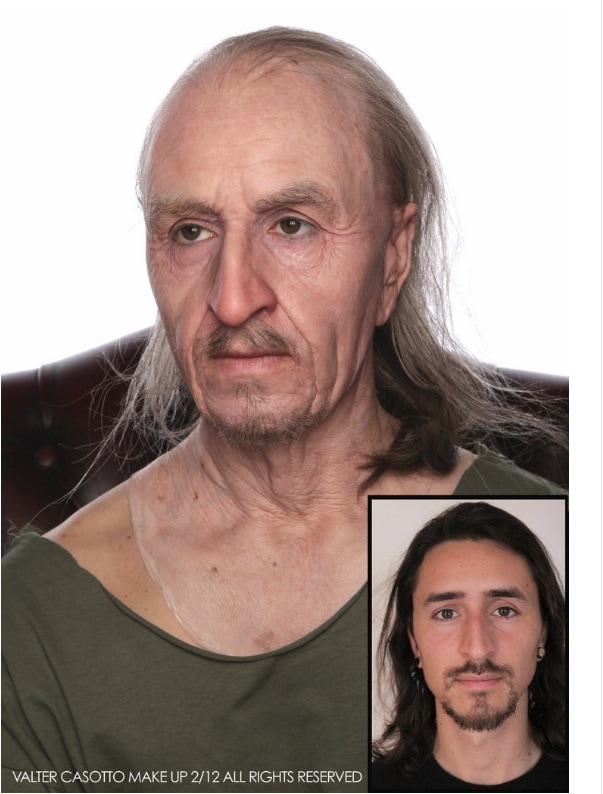 Valter created a self-portrait of his own ageing physiognomy, documenting his parents’ reaction to seeing their son at an age they will never meet in real life with a moving image piece, thus creating an impossible time breach in the fabric of his parents’ existence.
We will never meet at that age explores the concepts of time, life and death. 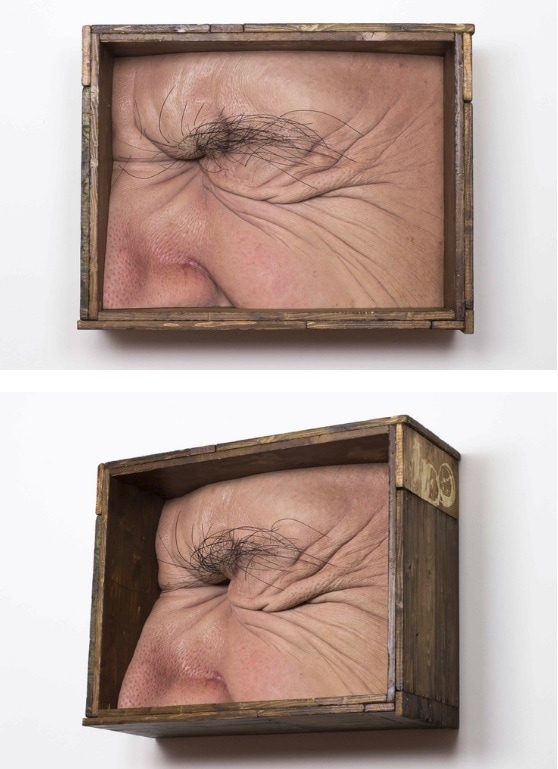 In the Box-IN THE BOX 1
2015
Silicone, fiberglass, wood, fishing line ,oil colours
63cm x 80cm x 29cm
In the Box 1 is part of a series of portraits, which capture someone through their on perspective as a portrait par excellence. The man's eye, his so-called door to the soul, but as well the door from which the person sees the world. With 'in the In the Box 1 we are looking at total closure ( regarding reality) 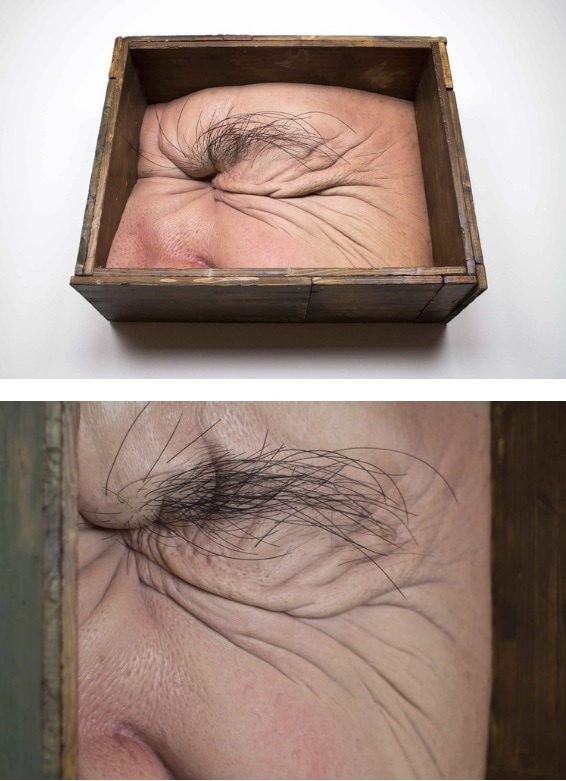 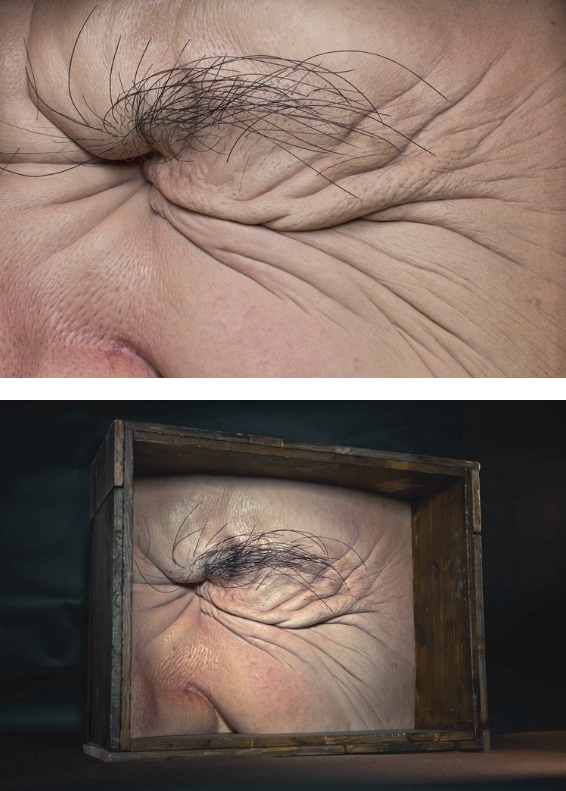 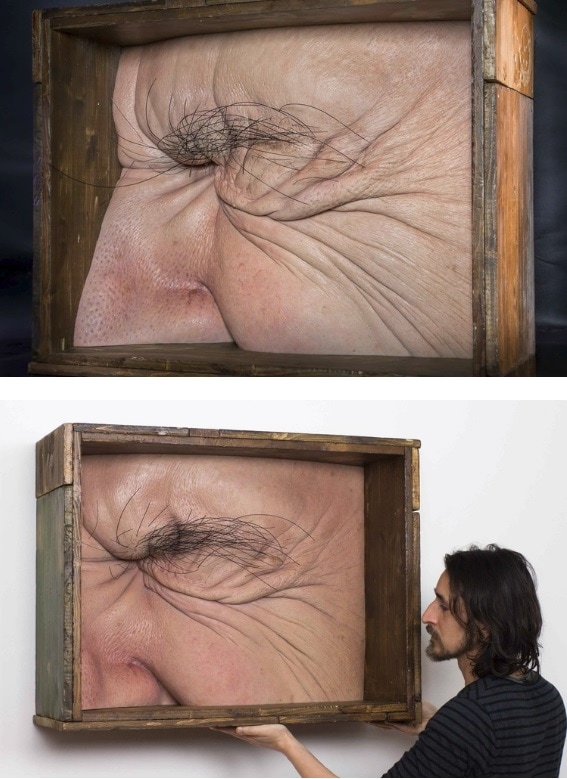 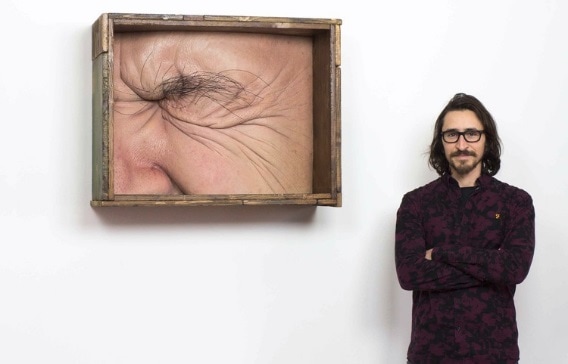 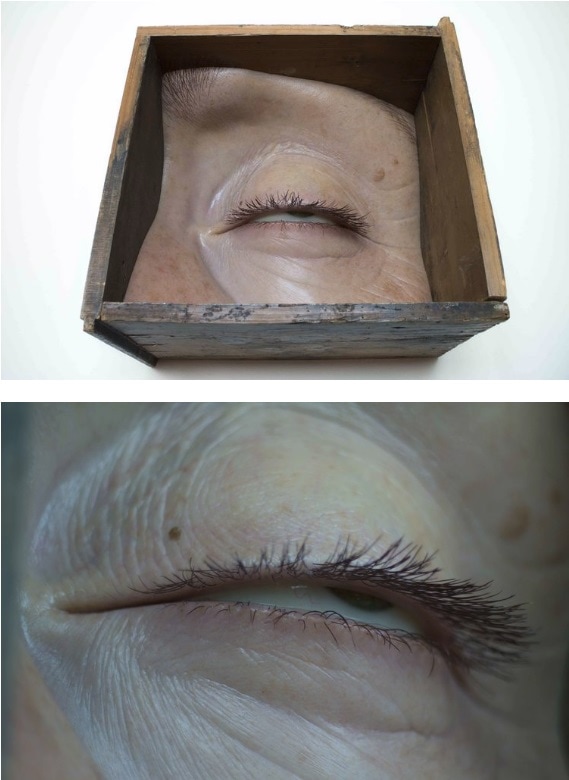 In the Box 2 is the second portrait in the series, in contrast to the first one with this portrait we do not know if the person is about to open or close their eye creating an effect of suspense, it's the description of an instant between nothingness and reality. 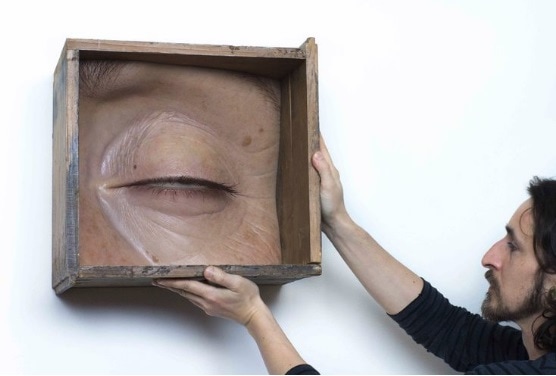 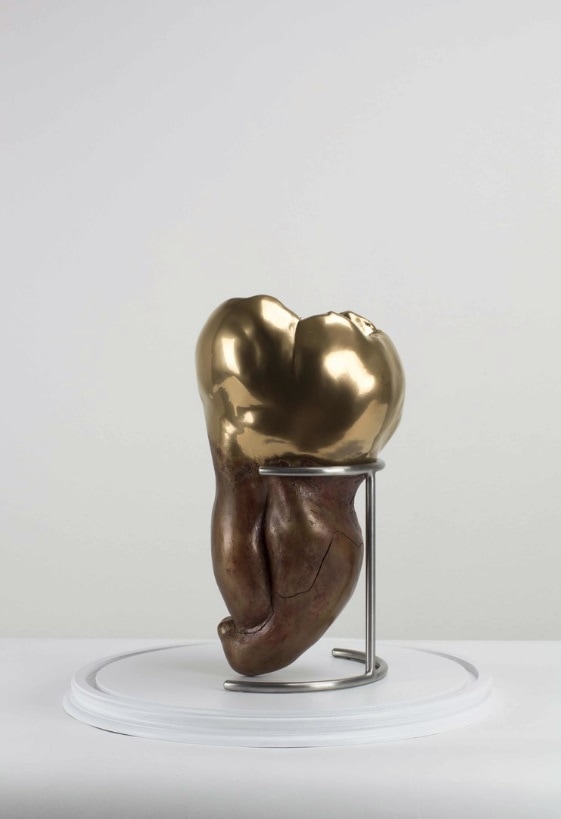 Teeth conserve the psycho-emotional memory of our life, they are a key to bring the subconscious mind into consciousness.
The lower right wisdom tooth reflects the power that we develop to express our feelings on our surroundings. This self portrait starts from an experience known to many, the wisdom tooth extraction. The tooth is presented in its actual state at the moment of the dental operation and through the consecutive phases representing the value of awareness , permutation from pain, acquisition and normalization. 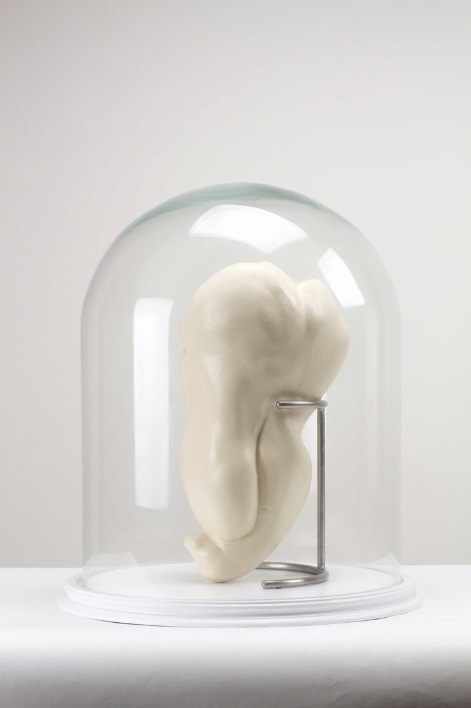 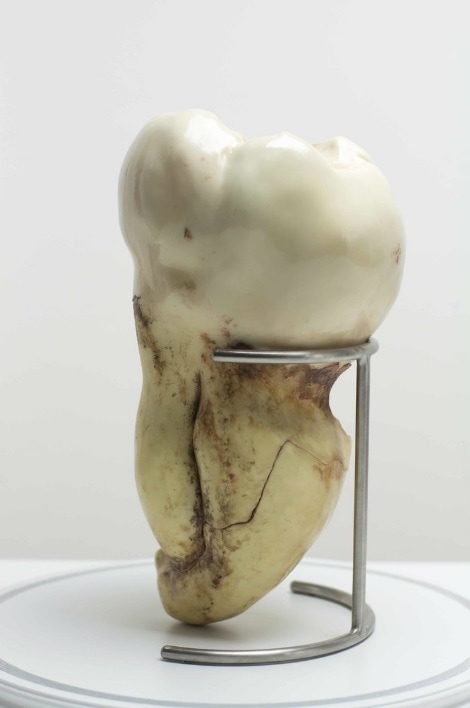 HERE AND NOW
2015
epoxy resin, wood, aluminium, led light
43,5cm x 87,5cm x 10cm
​
Here and Now is a self portrait exploring the notion of the present moment, the only instant to which we should be anchored to. Rumi, the great poet and teacher of Sufism, declares: “Past and future veil God from our sight; burn up both of them with fire.”

This hand belongs to the father's mother whom died recently. The title takes us into the heart of the work that began as a reflection on Italy, a dedication to the modern condition of a country tired and in decline.

The work is also a reflection on the condition of women workers, represented by a hand marked by the experience, love and fatigue It poses in the rest position, the moment of pause and little recollection before a future finished. One face to the past, looking of a woman's employment status that concerns us and, concerns us as Sons, the only condition, the latter, shared by the entire human race. The hand sculpture holds a rosary, this underline another aspect as the strong Christian interference due to the geographical proximity of the church in Italy.

​Beyond a positive reading of religion or not, it unfolds here as a feature of past Italian generations , which for most people led to a life of full dedication to the church itself. In the rosary there is also a lace insert, realized ad hoc, from one of the few coamings lacemaker from Burano.Here we have a tone of hope, given by the mastery in Venice and around the world have, in recent centuries, being distinguished for the excellence of laborious and native manufactures. This tribute to Burano lace wants to be a metaphor, positive and hopeful, of the quality handicraft, tipical in Italy. 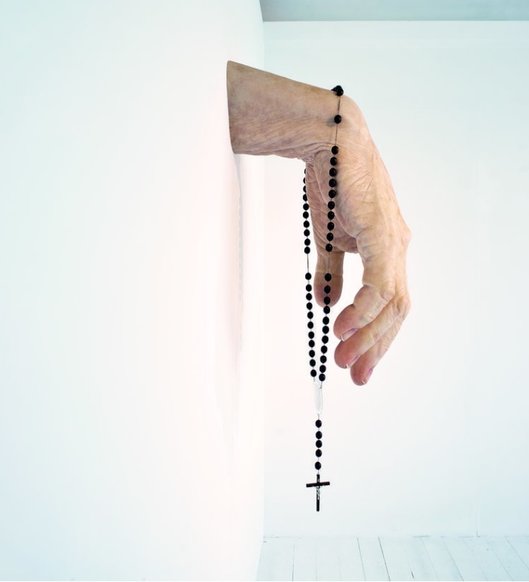 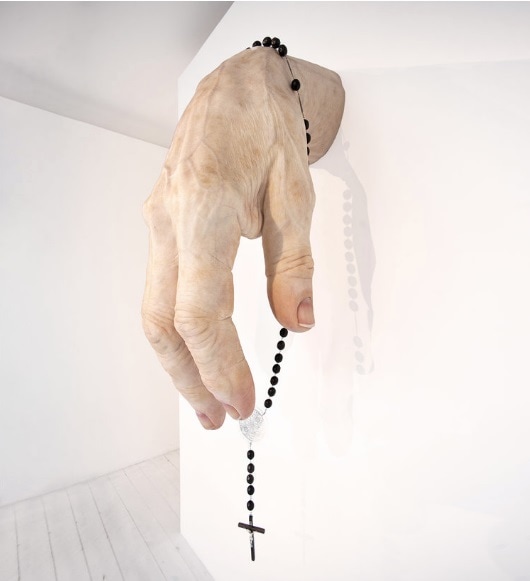 I've been part of the prosthetic team as art finisher/painter and on set makeup artist  for the Gringott goblins of Harry Potter and the deathly hallows part1&2 and HP Project-722 'theme Park' .
For Mufx Nick Dudman UK 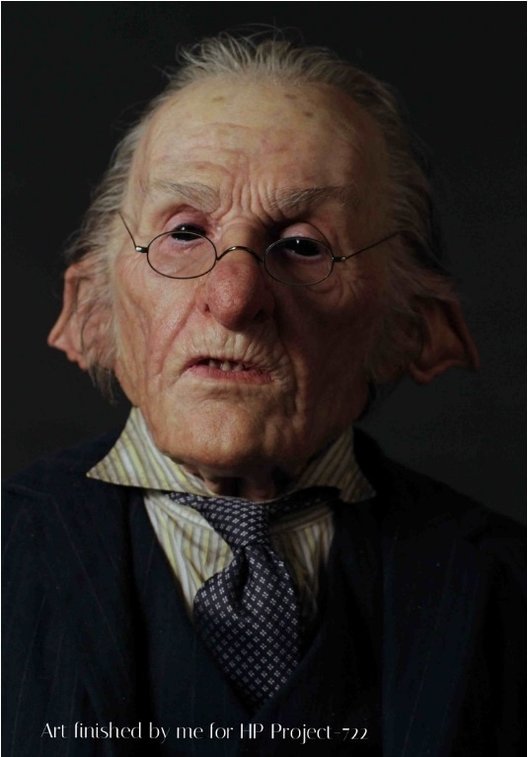 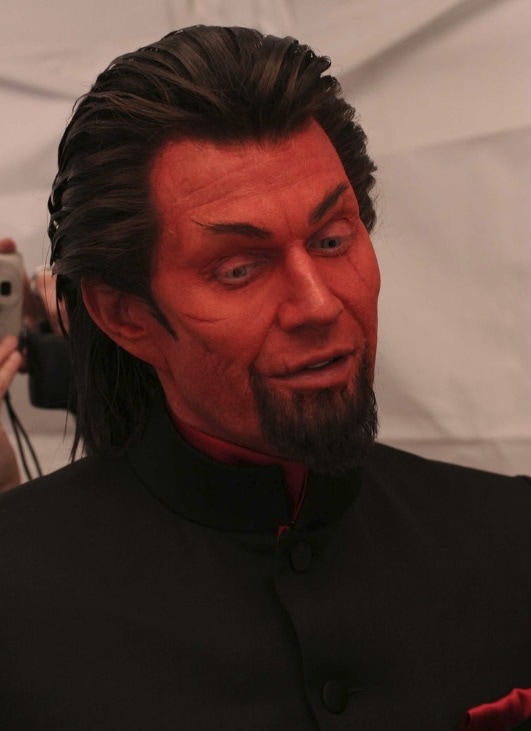 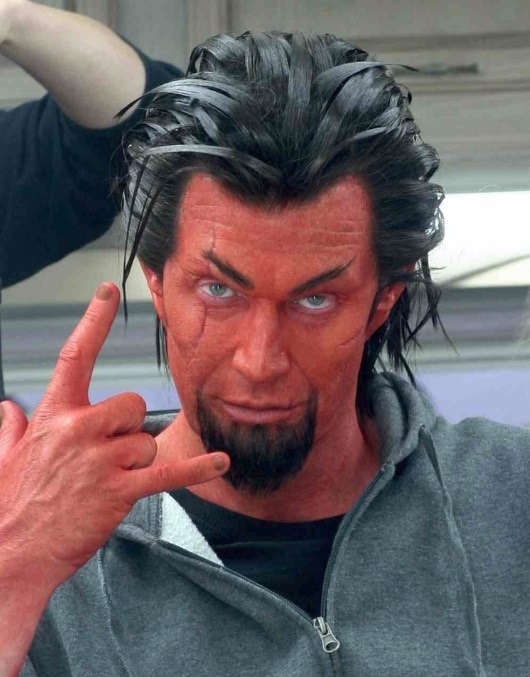 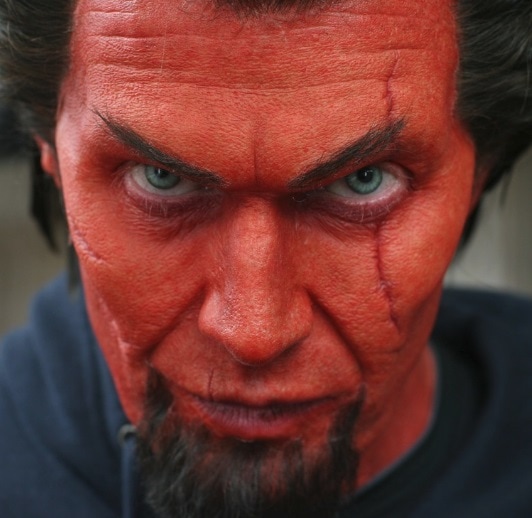 Myths, Monsters and Legends fine art project. I was involved in the project as sculptor, painter and silicon runner for the Manticore, Banshee and Arpy character under the supervision of Nigel Booth Studio UK. 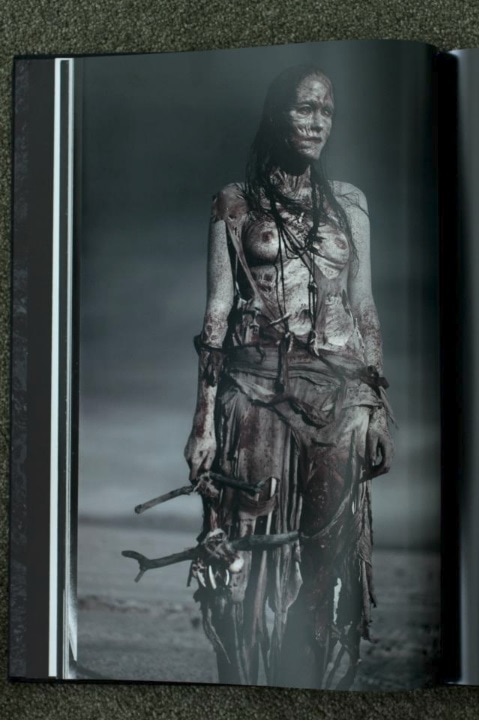 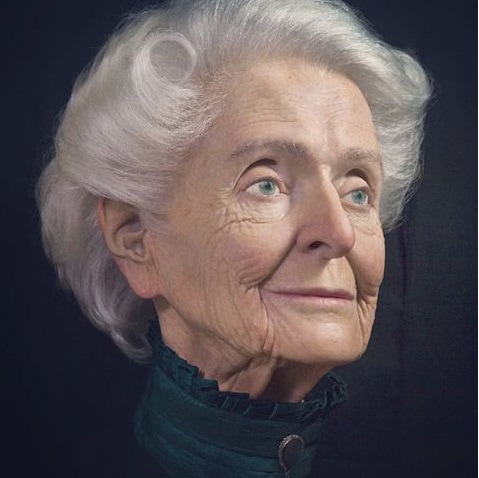