Boletin Y Sopa - Oleo Sobre Tela - 60 x 110 - Ano 2007
Pablo Solari was born in April 1953 in Buenos Aires, Argentina. He started painting at the age of four, he started his studies at  a children's art school, but then, at thirteen  decided to continue his studies on his own.

His Studies were  based on the classic reproductions, not wanting to study contemporary art which had no influence on him, It was important for him to find his own style, and a  personal way to express himself through painting and drawing.

Born in a family of Italian immigrants,  his  parents and grandparents had arrived in Argentina in the decade of 1930’s. This greatly influenced his training, because not only was he educated in the traditions but also in Italian culture.

He was touring the study of the great masters, and the various artistic currents of all ages. Here he was learning the techniques, composition and color, which served him well while he continued his studies. .

So Giotto his Grand Master, he learned composition. Miguel Angel brought  chromatic freedom, Fra Angelico how to combine colors, Caravaggio studied the garments, Rafael cleaning brush strokes of Van Gogh yellow falls also studied Fortuny in its contrasts.
It is studying the various techniques such as tempera, comics, advertising, comic books, but especially perfected in the drawing, achieving a high level at this point. Ink, pen, watercolor, and especially oil on canvas.

With his mastery of drawing, he decided not to copy anything, studying all the elements you see, the faces, gestures, light and shadow. When he paints he does not make preliminary sketches, but made the play in his mind, when "sees in his intelligence," he puts a white cloth in front of him and begins to paint directly.
In this way it achieves absolute freedom, because it is not copy or  a sketch, is not limited by a cloth, but once defined the work and cuts the fabric, and the frame.

The reasons behind  his works, making reality. Seeing  a situation, elaborated in his mind, and then creates the work. It is free in the choice of subjects,  and does not accept directives.

They have their own rules of composition, discarding  the established models. So all the characters and environments are in the foreground.  And with the gestures of hands and arms, and eyes he will indicate to the viewer of the work, where to keep watching.  So this does not leave the painting, but stays in it, crossing it.

Also his Chromatic approach  is personal, rejecting the chromatic standards set, believing that limits them takes away the  freedom.


Pablo Solari always says "I play to invent colors." So that he does not think the composite colors, for example, think of a "violet" but think of a "blue and red", and does not use pure colors, but mix the colors directly on the canvas, and always each color has a small amount of another, usually one that is close to balance the work and carries  a chromatic rhythm in his work.

His works are notable for the large number of characters, and complexity of elment’s, but all the characters and elements serve to reinforce a unique sense of the work. Thus achieving  the Unit.

In his paintings, the subject matter is evident, poses for the observer to interpret and draw their own conclusions. And it puts many elements so that the message is eloquent. With an accomplished Clarity.

In his songwriting, both chromatic and compositional there are no distractions to the meaning of the work. And thusly Achieves Harmony.

His works have a social sense, but never contain complete hopelessness. But always show that there is hope, that despite a difficult situation with no solution.  It shows the worker, and his efforts but also shows the pride they put into their work, that gives the compositions dignity and honesty.

His style is very personal, because having complete freedom not only in their own chromatic and compositional rules, But also not following any previous or current artistic current, already have their own "graphic content  unaware of everything and just expertly  painted.
In developing this work from the inside out, with no influence on anything or anyone.

In his style called "Interior Realism" for painting the inside people, not outside. He Paints the feeling of his characters.

It is common to ask him "in an art exhibition, of  a thousand paintings, I recognize his works, why?". For this reason it is sought after by collectors, since he himself is defined as Italian classics
made as a Latin American painting.


My way of painting
10 de junio de 2014 a las 12:24
Of autodidact training, he defines his artistic vocation at an early age (4 years old); he begins to study in workshops for children, up until the moment he decides not to copy from others anymore, to find himself in the painting and be recognized for his personal work.
​
He begins to study the Classics, leaving aside the contemporary art (when he is 13 years old). This is how he takes Giotto as his Teacher, he also studies Miguel Angel (from whom he takes the anatomical studies and the chromatic freedom), Fra Angelico, Carvaggio, Rafael (in the brush-stroke finish), Fortuny, Van Gogh (in his chromatics), and the Mexican muralists Orozco, Rivera and Siqueiros.
He identifies with mural paintings; this is why he depicts his works as just a part of a big setting, as a small portion of a great mural, under the concept of a photography camera, where he chooses just one part and not the whole. But that little portion represents the whole.

Not only he studies the Classics in a self-taught way, but also he studies Comics, Cartoons, advertising techniques, and above all he specializes in the drawing, which shall be the foundation of his works to such a degree that he does not make a sketch and, once the piece is established, he puts it down in the blank canvas; this is like a creative freedom expression, already reasoned, but not adjusted to a sketch, since he considers this as the act of copying.
He goes deeply into his drawing studies, in human anatomy, in objects, in the chiaroscuro influence, in light and shadow, in such a way that when painting he does not take an object to paint it, he imagines it, deducting the chromatic and shape influence in the whole. His painting is “Rational”, therefore, personal, it comes from within, the way he sees it.

Having studied all the styles, he took only what he thought was interesting in the technical part, not in the fundamental part, casting it aside later, in order not to be influenced in his way of expression.
He fully identifies with the Italian Classics, to which he incorporates a Latin-American vision.
He defines himself as an “Inner Realist", since he is in pursuit of painting the inner part of the human being and not the exterior part, in this way he leaves aside the hyperrealism. He seeks to capture the feeling, the suffering and the joy of men, but not in a desperate situation, in a normal situation, in the everyday life, always with hope.
When creating his works, he does not follow a chromatic or a composition language in order not to loose his creative freedom, but he searches for the harmony of the whole, the clarity of the message
he wants to represent and the unity of the piece.

In the chromatic point of view, he tries to “play to create colors”, so he does not use pure colors, he always put a touch of other color, mixing opposite colors with complementary colors, trying to  and managing to achieve a color brilliance, given by his personal way of linking the colors to the work of art.
He seeks to emphasize the light, so that everything can be seen, depicting the present image, of  high definition, where everything can be appreciated, even the smallest detail. 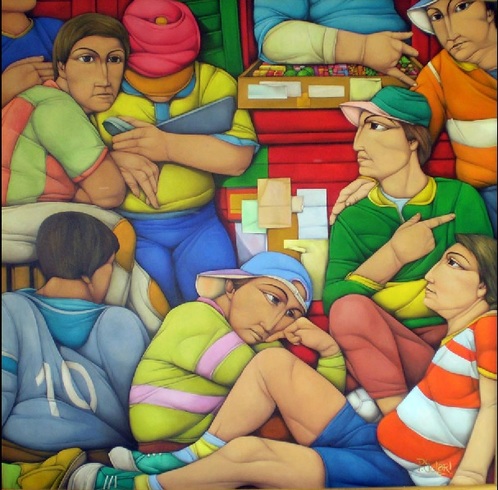 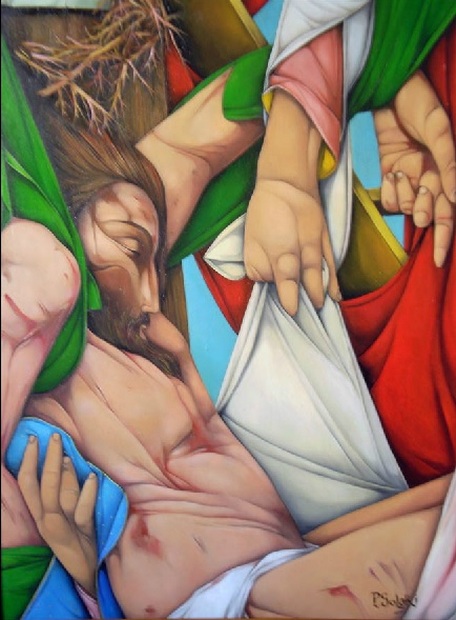 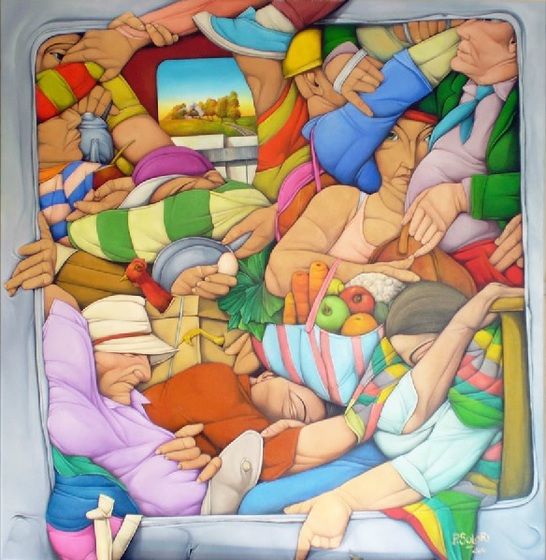 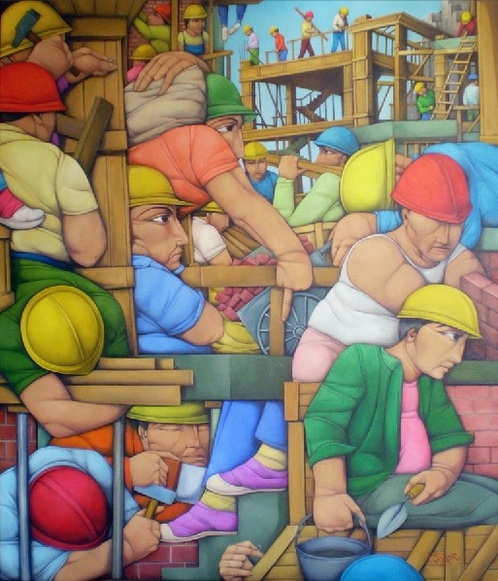 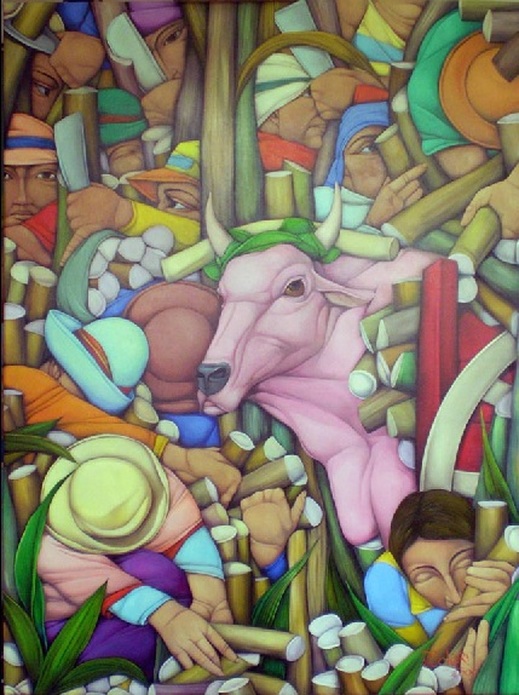 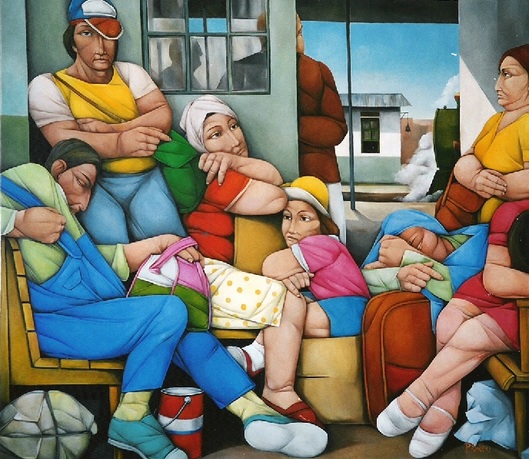 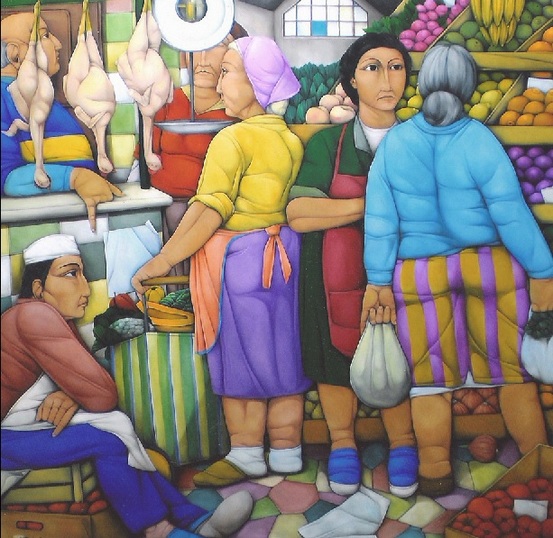