Architecture of the Elsewhere

Architecture of the Elsewhere is a survey of contemporary practices, ranging from painting, photo, dance, video and sculpture. This group of artists explore faceted realities, dis junctions, perspectives, and memories of a land, universe, space or alternate dimension that they have traversed, lived in, come from or contemplate. 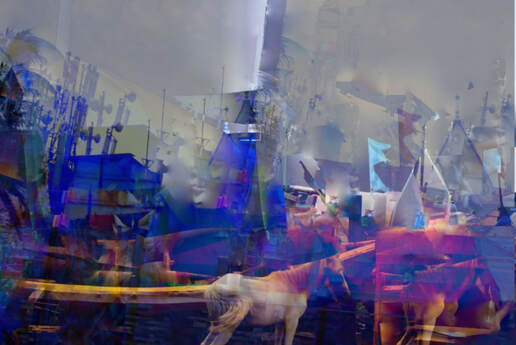 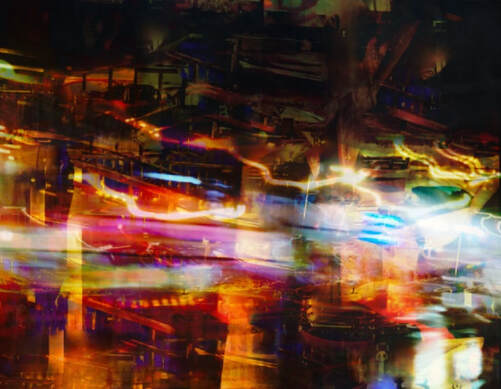 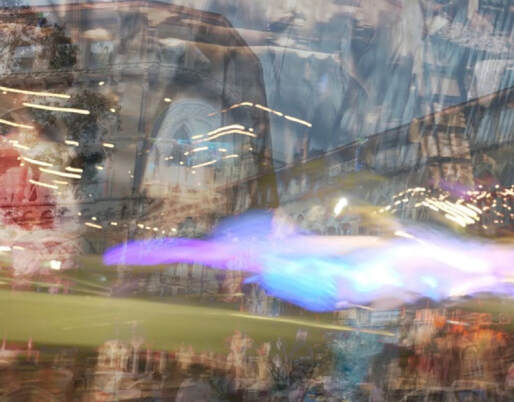 Akshita Gandhi (b. 1988, India) is a multimedia artist based in Mumbai. She holds an MFA from the Lotus Institute in Dubai. By merging social, historical, and mythological concepts her work concentrates on breaking out of stereotypical gender roles, grappling with the history of colonialism, and self-empowerment. In the mixed media painting, light box, and poetry series Freedom,

​Her body immersive installations include Le cirque de la liberté (2020), a mise-en-scene inspired by the circus, and Dare to Break Free (2020), a commission by the Berlin-based music festival Kater Blau. Gandhi has also collaborated with Frank DeBourge during New York Fashion Week and the Indian menswear brand Kurtees. Fall 2021, the artist will be highlighted in her first institutional solo-show at the Nehru Center in London. Private Collections include Sheikh Mohammed bin Rashid al Maktoum. 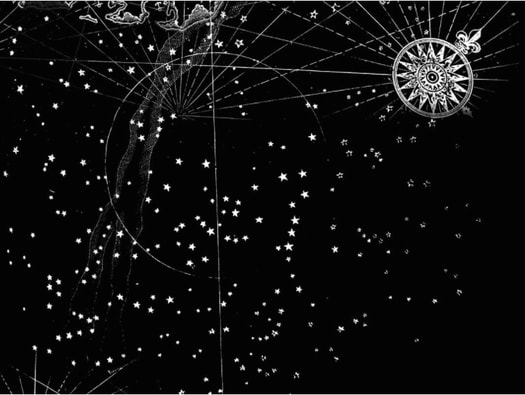 Michael Eckblad, All The Stars (2017), 8' x 12', acrylic on canvas
This meditative project is a cartographic expression of our Milky Way Galaxy, and is a response to the phenomena in our physical world that make a self-righting boat possible. The sine wave-like visualization of the night sky resembles–what is known in the boat building world–as a stability curve, which describes in mathematical terms any given vessel’s proclivity to resist capsizing.
​

Would leaving be a journey to fulfill oneself, to rebuild oneself?
Would it be a quest for freedom, to surpass oneself?
What space will welcome us or de-welcome us?
What is this “elsewhere” in a globalized environment?
After all, are the quest for Elsewhere and taking root doomed to remain forever opposing concepts?
​Or can they meet, or even, at a deeper level, intersect and merge.

​Meriem Dahmani: performer, choreographer and teacher in contemporary dance.
When I was little, my body was language. Overcoming the difficulty of words, the movement of the body developed signifiers, to express with all the energy that animated it, the feeling of the moment: desire, anger, hurt ... joy. It was from this discovery that I began to have a passion for dance.
Then time took its course and it is only later in my  journey that I realize my vocation.

I decided to train in dance by going into exile in Montreal, after having left France, the country of my first exile.
I chose this art which does not use any mediator. The body is both an instrument and a writing space. An ephemeral writing, mixing emotion, imagination, memory and history.

My dance experience in two countries, France and Canada, allowed me to explore different methods of learning, creation, and research spaces. Then my human experience, whether through the various creations in which I have participated, my artistic collaborations, but above all the meetings and exchanges that I have had. I would remember three highlights: an internship in Algiers (Algeria) during which I worked with the dancers of the Contemporary Ballet of Algiers. The creation and performance of a piece presented at the Mather Dance Studio (Case Western Reserve University) in Cleveland (USA) as part of the project "Create to resist: Two Generations of Arab Women". Finally in 2017, my first contemporary dance workshop for a collective of women in Algiers. One of my dreams come true: to share my art in my native country. 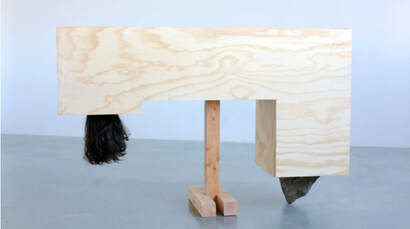 Tammy Kiku Logan is a graduate of the Yale School of Art and received her BFA from the School of Art + Design at Purchase College.  Tammy is the recipient of the Fannie B. Pardee Prize in sculpture and was awarded the Maya Lin Art and Architecture Scholarship. Her work has been exhibited at Abrons Art Center in New York, NY and The Bronx Museum of the Arts in New York, NY. Tammy has attended residencies at the School of Visual Arts, Chashama and Vermont Studio Center.

Ruby. from Tanin Torabi on Vimeo.

Ruby. from Tanin Torabi on Vimeo.

Tanin Torabi(طنین ترابی)was born in 1992 in Tehran, Iran. She has got her BA in Sociology and her MA in Contemporary Dance Performance from University of Limerick, Ireland. Torabi has made several award winning dance films and performances and currently works as a dancer, choreographer and dance film maker in Iran and Ireland.

Her most noticeable works are The Dérive, Invisible Point, Ruby, Beyond the Frames and Immensity. She has received more than 15 awards for her films to date and her works has been described as rebellious, creative, inspiring, unbearably elegant and affecting, emblematic and poignant, empowering to women, and with clarity and an exceptional ambition that is
ayered with a complexity of personal and cultural nuance, by festival directors. 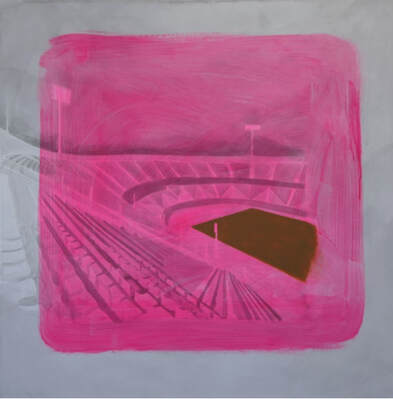 
Mahsa R. Fard often paints man-made large scale structures such as cities, stadiums, and apparatuses. She tends to create a new association by introducing unusual color and spatial relationships. Growing up in Iran, she has always been conscious
of the dominance of rigid patriarchal gaze both in the public and private sphere.

Accessing public and private domains as a female requires subversive strategies. Her imagery reflects a woman’s forced duplicitous roles in these domains. Mahsa contemplates and practices these strategies in her painting and writing through metaphors
of censorship, sarcasm, camouflage, cover, and disguise.

Mahsa has recently graduated from LeRoy E. Hoffberger School of Painting at
the Maryland InstituteCollege of Art in Baltimore. 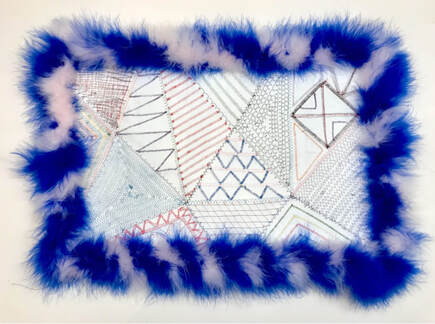 Colombian / American artist Jamie Martinez immigrated to Florida at the age of twelve from South America. He attended The Miami International University of Art and Design then moved to New York to continue his fine art education at
The Fashion Institute of Technology and The Students Art League in NYC. 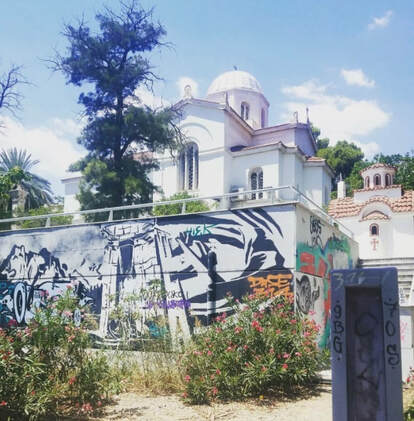 Cea / (Constantine Jones) is an interdisciplinary Greek-American thing maker raised in Tennessee & housed in Brooklyn. They are a member of the Artist+ Registry at Visual AIDS—the largest database of works by artists  with HIV/AIDS—where they also serve on the Archives Committee, as well as a member of the What Would An HIV Doula Do? collective. They are the author of In Still Rooms (Operating System 2020) & the collaborative chapbook with Portuguese visual artist Vicente Sampaio, BALEEN: A Poem In Twelve Days (Ursus Americanus 2021). Their work has been performed or exhibited in various venues across NYC & Tennessee. 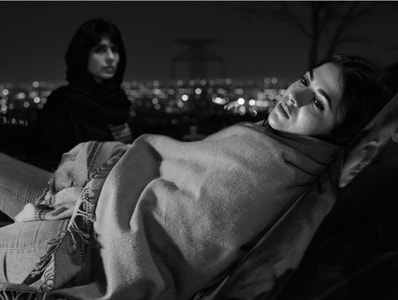 Sara Abbaspour (born in Mashhad, Iran) is an Iranian artist who lives and works between the U.S. and Iran. She holds an MFA in Photography from Yale School of Art, an MA in Photography from the University of Tehran, and a B.Sc. in Urban Planning and Design from Ferdowsi University of Mashhad. She is interested in studying the poetics of spaces in transitional states and making visual poetry using portraiture and landscape. She has photographically reflected on the urban public sphere vs. private realms and interiors vs. exteriors as mental spaces. Exploring the notion of
​psycho geography, her works exist in-between the imagined and the experienced in the current socio-political climate. 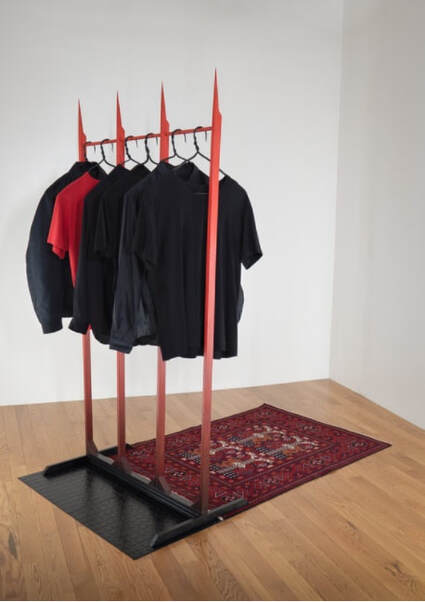